Twelve month a year, Fear from the flood

Local people from Bhotekoshi surroundings are 14/7 under fear from flood after Glacial Lake Outbrust Flood (GLOF)
Mukesh Pokhrel
Furba Sherpa from Marmi- 1,Sindhupalchok became unemployed after the devastating flood of Bhotekoshi that occurred at 21stAshad 2073 night. Before the disaster he used to earn about 15,000 Nepali Rupees monthly through the mill in Chaku. “Flood took away mill and house. Now I am unemployed, it is difficult to earn for livelihood”, he said.
Furba is not only one who suffered from the disaster. After the flood took away home, Bhaktabahadur Nepali from Tatopani-3, Liping and the family is now migrated to Kodari. He has to pay 6,000 Nrs per month. Before the flood he used to keep a shop in the one shutter of same house and used to earn 25,000 Nrs monthly. “I was managing everything well after earthquake, all the things was going good, but flood took my everything away. The flood gave more shock than Mahabhukampa (earthquake)”, Nepali said. 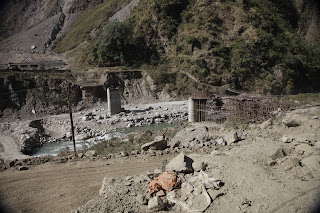 A series of sadness spreads from Chehere of AranikoRajmarg to Liping. Nimadorje Sherpa from Liping migrated to Kodari after his house was swept away. Kami Dolma Sherpa is now living in Boudha, Kathmandu now a day’s who used to have a 4 storied guest house near Tatopanidhara. She still has to pay 30 lakhs NRs that she took for constructing the house. She had dreamt of paying all her debts form the earnings of the Guest house.  “Business was runnig smoothly after some time of earthquake but this flood swept everything away”, she said.
A sudden flood that took place in Bhotekoshi on 21stAshad swept 125 households from Tatopani as well as Liping and 3km black topped road from Barabishe to Liping. According to KhumlalBhusal, Police Inspector from Area Police Office, no any house are fit to stay in the area. Also, there is the threat of landslide. Police station was also shifted at Kodar Ma. Vi. for two months he added. 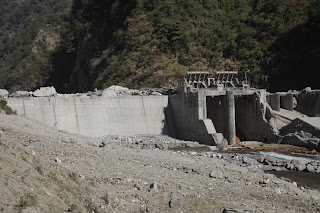 No one knows when the flood strikes in Bhotekoshi.  Since Bhotekoshi is contributed by Glacier lakes, Global warning and changing climate is accelerating glacier retreat and the consequences are increasing numbers of extreme events. Landslide induced flood and GLOF if it occurs on Tibet then there is the high chance that flood can strike in Bhotekoshi too.
The devastating earthquake that took palce in April 25th 2015 has changed the geological structures of the area and thus the risk of flood is even high now. Kami Dolma Sherpa aged 73, a local resident had seen such flood in 1981 AD. At that time Bhanbhango glacial Lake of Tibet had brusted and flood took place, she remembers. But the destruction is more now as compared to previous.
TankanathSapkota from sangachok-1, Khatrithok remembers the incident that converted his fertile land into barren. Sapkota family still pay money to the landlord in the hope that one day the land can be made fertile to some extent for cultivation. “With a great hope and risk million rupees are invested in Bhotekoshi Hydropower which can be swept anytime by the flood”, says officer Sabin Tamang from Mid-Bhotekoshi project. The dam of the hydropower is destruced badly after Ashad flood, he added. Further Bhusal, Area Police officer added that the dam had successfully stopped the large amount of debris which could sweep the whole Barabishe bazaar. 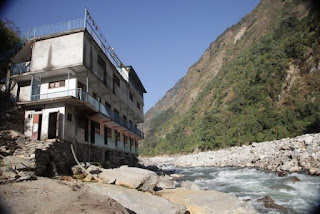 Before the incident, Bhotekoshi hydropower, Sunkoshi Electricity house and Bhairabkunda hydropower altogether were responsible for producing 57 MW electricity. Now the 45MW production of electricity from Bhotekoshi has been stopped. At this time a project responsible for 101 MW electricity productions is under construction and also the various companies have been granted with permission for electricity production more than 1700MW.
A large number of people from Kathmandu used to reach Khadichaur to have the taste of fishes from Bhotekoshi. Kamala Shrestha from Sangachok-1, Simle used to sell almost 20kg fishes per day. But the condition has now changed. These days people cannot enjoy the fish in any hotels from Dolalghat to Tatopani however, some hotel people are selling fishes from Terai. 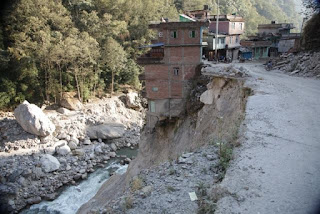 Environmental impacts are much higher along with physical and economical damage. Disruption of the aquatic ecosystem has occurred which has direct impact on the livelihood of the fisherman. Ram Majhi form Khadichaursays “Now we find no any fishes in the river and also I have no any interest to join other occupation for livelihood”.
Nearly 30-40 fishermen used to earn their livelihood by selling the fish in the local market. “Agriculture Development Office had initiated the task to transferring the Junge and Royal fishes from Trishuli to Bhotekoshi to improve the livelihood condition of Majhis”, said SahilaMajhi. Study done in last year also revealed that the weight and number of the fishes had increased significantly. But the debris from the flood has has significantly redued fishes in the Bhotekoshi. 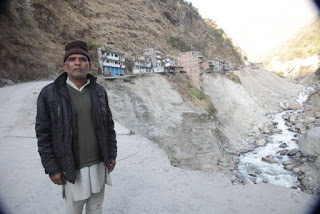